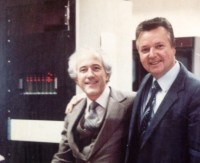 In 1987 the Club formally became "The International Voicemail Association" (iVMA.com) eventually gaining a membership of over 200 Telecom providers and equipment vendors worldwide. René Beusch and Paul Finnigan served as Chairman and  President respectively until 1999.

The VMA held bi-annual conferences throughout Europe hosted by Telecom providers and sponsored by equipment vendors. The invitation only conferences were generally sold out affairs of 200 attendees.  The VMA conducted a U.S. Technology Tour that was hosted by long distance carriers, the regional bell operating companies and equipment manufactures.

The VMA continues today to serve as a melding pot for service providers in regard to enhanced communication services.

Made with SimDif
Paul Finnigan